How to use this resource

Sex work laws can be confusing and difficult to comply with and can compromise our safety. They are different in each state and territory, so sex work activities that are legal in one state may not be legal in another.

If you’ve been charged or received a fine or official notice while doing sex work, have further questions about the laws, or are concerned about your health and safety at work, contact Magenta or SWEAR for advice and support.

3
The most complicated aspect of WA’s laws is the difference between what the laws say and how they’re enforced. Most of these laws aren’t currently enforced, but there are still some key things that sex workers need to know about working in WA:

Enforcement patterns can change, so you might find it helpful to be familiar with the laws for the type/s of sex work you do. You can use the navigation links at the top of this page, or just read on to find them. You can also always contact Magenta or SWEAR for peer support.

SWEAR has also created this one-page resource on WA’s sex work laws. You can click on the image to see a full-size version. 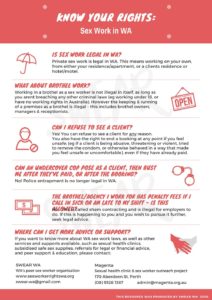 3
Despite sex work being part of Western Australia’s folklore, the industry has been criminalised throughout the state’s history. During the 20th century, lawmakers operated under an approach of ‘containment’. Rather than trying to stop sex work in a state internationally famous for its brothels, police ‘contained’ the industry by tolerating sex work in limited areas if business owners were ‘cooperative’. ‘Cooperating’ meant allowing police to surveil and question sex workers, forcing us to undergo frequent invasive sexual health testing, and providing tip-offs to police about other criminal activity.

In 2000, as a response to a moral panic around street-based sex work, the ‘containment’ approach was officially ended and the Prostitution Act 2000 was passed, which punitively criminalised street-based sex work and gave police wide powers to entrap, arrest, move on, search, and seize the property of suspected sex workers. The Criminal Code Act Compilation Act 1913 (the Criminal Code) continued to prohibit operating a brothel and/or ‘living off the earnings’ of prostitution.

There have been several attempts to reform the laws relating to sex work, including a proposed licensing system in 2002, which was strongly opposed by Scarlet Alliance and Western Australian sex workers and did not become law. Decriminalisation legislation was passed by the WA Labor government in 2007, but never took effect due to a change of government. The LNP government unsuccessfully attempted to introduce a licensing system in 2011.

The Prostitution Act 2000 and the Criminal Code remain in force today.

The act of providing sexual services in exchange for payment is legal in Western Australia, but many activities associated with sex work are offences.

This means that many forms of sex work are criminalised. However, only some of the sex work laws are enforced in practice. This creates many ‘grey areas’ within the legislation that can be confusing and difficult for sex workers to navigate. For the narrow window of legal sex work, the Prostitution Act 2000 attempts to regulate the industry by placing strict controls on sex workers.

What is considered sex work?

3
Sex work is defined broadly – as any sexual stimulation of a person in exchange for any form of payment, either by physical contact or by using ‘anything controlled by or emanating from the other’ (Prostitution Act 2000).


3
It is illegal to engage in an ‘act of prostitution’ without using a prophylactic (condom or similar). The maximum penalty is a $5000 fine (Prostitution Act 2000).

Many STI and BBV are ‘notifiable infections’ in some or all states and territories. This means that diagnosed cases of these infections are confidentially reported to state or territory health departments. You can find more information on the notifiable conditions in each jurisdiction on our BBV, STI and the Law resource, or contact your local sex worker peer organisation for support if you’re concerned about any impact this might have on your work.

The Prostitution Act 2000 also criminalises the involvement of people under the age of 18 in sex work (including the criminalisation of underage workers). For further information, contact Magenta or SWEAR.

There are also a number of historic laws relating to sex workers outlined in WA legislation, but these have not been enforced since 2000 (see page 32 of the linked report for further info).

Advertising sex work services can also be impacted by federal advertising and internet laws, as well as the requirements of private advertising service providers.

Detention, search, and seizure without warrant

Searches must be carried out by a person of the same sex as the person being searched. There is no legislative provision to ensure that this right is protected for trans and gender diverse (TGD) sex workers, and WAPOL’s internal policy on searches of TGD sex workers is unclear. ‘Cavity searches’ are also allowed, but must be conducted by a medical professional. Police officers may use ‘reasonable force’ to get a person to comply with the search.

These types of searches are usually conducted on street-based sex workers, as this form of work is specifically targeted and criminalised (see Sex Work Workplaces – street-based sex work below). However, police also have powers to enter and search sex industry businesses (see Legal information – sex work workplaces below).

If you are concerned about any interaction you have had with police in the course of doing sex work, contact Magenta or SWEAR.

Exchanging (protected) sexual services for payment in a private place is not a crime in WA. Police entrapment of sex workers inside an establishment (i.e. a police officer posing as a client and busting a worker after they’ve paid or after a booking) is illegal. If you experience police entrapment, contact SWEAR or Magenta.

What WA’s sex work laws say can be very different from what happens in practice, because they are not all enforced. Contact SWEAR or Magenta for more information.

According to legislation, it is illegal for sex work businesses (including those who own, manage or operate them) to:

There is no law prohibiting doing sex work in a sex work establishment, but owning or operating a brothel is prohibited (see Offences for sex work businesses above). In practice, brothels operate openly, but this can mean that brothel and club workers can be surveilled and scrutinised by the police. These premises may also risk evictions by a local council or landlord.

In Powell v Devereaux [Supreme Court of Western Australia, 12 June 1987, Appeal No 1053 of 1987] the court held that ‘brothel-keeping’ offences did not apply to escort agencies. However it is likely these establishments would be captured by ‘living off the earnings’ and ‘procuring’ offences. In practice, escort agencies operate openly, and it is legal to be a worker for one.

It is legal to do private sex work in a client’s home or other private premises, e.g. a motel or hotel room (outcalls).

Private sex work by a single worker from a premises (incalls) is a legal grey area. It is likely that one private sex worker working from their own home is legal (i.e. not criminalised – see page 26 of the linked article). However if the place they are working in does not comply with local council requirements, or they do not have permission from a landlord, strata management, or body corporate, tenants may face eviction.

It is illegal for a person to seek the services of a sex worker ‘in or in the view or within hearing of a public place.’ (Prostitution Act 2000).

Police entrapment of street-based sex workers (i.e. a police officer posing as a client and busting a worker after they’ve paid or after a booking) is unacceptable police practice. If you experience entrapment, contact SWEAR or Magenta.

If a police officer suspects that a person has engaged in, or intends to engage in, street-based sex work (either as a sex worker or client), the police officer may order that person in writing to move away from the area for a period of up to 24 hours. Penalties for ignoring this order are: $6,000 fine for a first offence, or 1 year imprisonment for subsequent offences. If the direction is ignored, the court may also issue a restraining order preventing a person from otherwise legal behaviours or from being in a particular public area. The restraining order may last for up to one year.